At what speed should my saw blades spin?

Woodworking tools, from table saws to portable saws right down to tiny routers vary in rotational speeds from around 3,000 RPM (Revolutions Per Minute) up to 50,000 RPM.  If it is a direct drive motor, the arbor RPM and the blade RMP are the same, which is true of routers and many, but not all woodworking saws.  Some table saws are direct drive or have equal sized pulleys.  This is important if you want to know the “rim speed” or “linear tooth” speed of the blade.

In addition there is the question of the number of teeth on the blade.  Aside from the obvious that a large blade can hold more teeth than a small blade, it is the number of teeth per inch on the blade that is really important – measured around the circumference of the blade.  For a given speed of feeding wood to the blade, fewer teeth per inch will cause each tooth to bite more wood.   With teeth spaced further apart you can get fast rough rip cuts and as the teeth come closer together you get finer and finer cuts right up until you get burning on the wood.  Here the thickness of the wood also comes into play.

Then the power of the motor will determine if for a given blade and a given wood and a given feed speed, or how hard you push into the wood, you can cut without slowing down the rotation of the blade – which changes everything and forces the motor.

Surprisingly, despite all those variations, power woodworking tools are generally designed for one thing to remain fairly constant:  the linear speed at which the cutting teeth hit the wood.   There is in fact fairly common agreement that for general work, the tooth should be moving somewhere around 130 to 170 feet per second.  That may look like a big spread for you, but if you look at the fact that we are dealing with tools that vary from 3,000 RPM to 50,000 RPM, 130 – 170 fps is rather consistent.   In general, harder materials and blades with a thicker rim require slower speeds, while softer materials and blades with thin rims permit faster speeds. 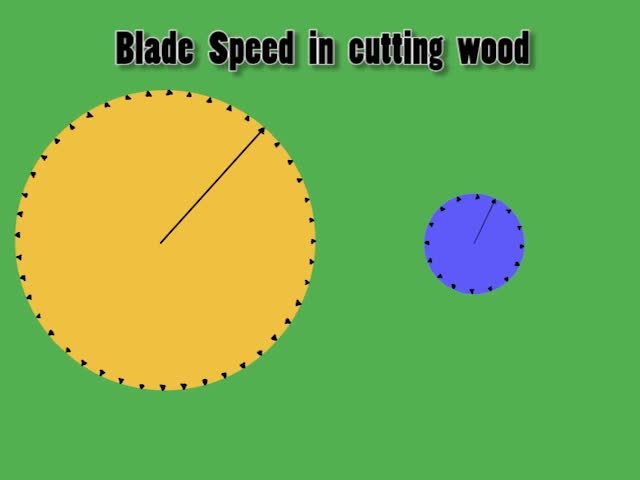 There is a relationship between the diameter of the blade or bit circle (actually we calculate the circumference or distance around the blade), the rotational speed of the blade or bit and the linear speed of its teeth.  For a large blade to make one rotation, any given tooth has to travel a long distance.  For a tooth on a very small blade one rotation does not travel nearly as far, so it has to go faster to keep up with its big brother.

Here is a little table to see the numbers on some real life direct drive wood working tools, but you can see the concept better by playing the video above.

Most saws work at one speed with one blade, so the manufacturer builds things to match.  A router has some radically different sized bits, so the variable speed on the router allows for keeping the cutting teeth hitting the wood at the proper speed.

If you are trying to figure how fast to set your router – let’s aim at the 130 fps.  When you simplify the math, divide 30,000 by the diameter of the blade in inches to find the RPM.

This could help you to get very much the same “cut” with two very different router bits.

Maximum RPM often listed on saw blades refers to the maximum safe rotational speed for a given blade – not optimum cutting speeds.  Spinning faster than the Maximum RPM could cause the teeth to fly right off of the blade or the blade to fracture with a shock.

If you are working with pulleys between the motor and the blade, here is a great chart from Diamond Pacific Corporation to help figure out pulley ratios.

Folow this link for an explanation as to why there are so many different sized circular saw blades.

For those who want the Algebra to get from “blade diameter in inches” and “blade rotation in rpm” to tooth linier movement in Feet/Second:

Now you see that algebra course is still useful long after you left school.